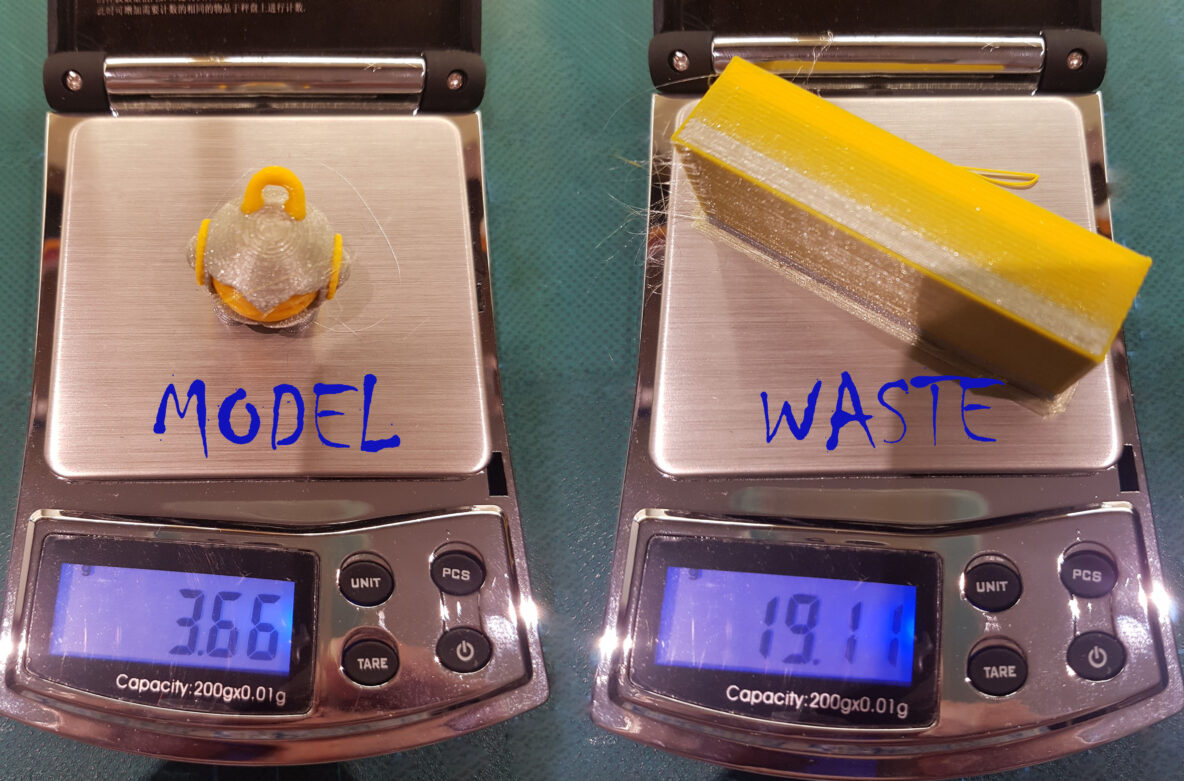 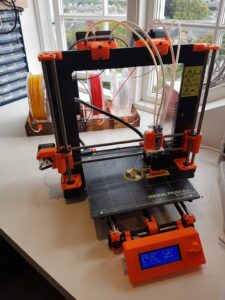 I ordered the Multi-Material upgrade for my Prusa i3 MK2 a while ago (May I think) and it finally arrived a week or so ago. It isn’t too difficult a build but I decided to upgrade a few other parts (the U brackets that hold the bed are a big improvement on tie-wraps) to bring the rest of the printer up to MK2S level.  After the few hours of construction the printer felt a lot heavier (I guess three extra stepper motors will do that) but it did look the part and I was reasonably happy that everything was in the right place. Ironically the extra weight doesn’t affect the print head movement – that’s actually lighter now as the Multi-Material version uses bowden tubes so the extruder motor(s) don’t have to move with the hot-end. 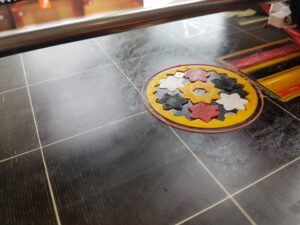 I started with a pre-sliced model of a Herringbone Planetary Gear but pretty quickly it became clear that adherence to the build plate wasn’t good enough and I restarted with a layer of Pritt applied to the bed.  Even on this early run though it was clear that a pretty big area of printing (the wipe tower visible to the right of the model in the photo on the right) was being performed simply to evacuate the hot-end chamber of one colour and replace with another.

The second attempt was better but pretty quickly one of the red gears started to lift from the bed and I expected the head to hit the upward curl and complete the job of wrecking that gear. That didn’t happen however and the machine progressed to the central layers of the model which are all one colour. 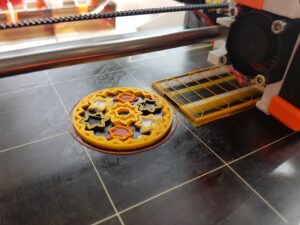 Interestingly at this point the wipe tower became a thin string of a single colour (yellow in this case). I’m not really clear why it does this – I suppose it is difficult to lower the head once it has been raised but I thought (incorrectly), that once it was doing a single colour the wipe tower would be redundant. Instead it never seems to go down once it has gone up and, consequentially, it has to keep building the wipe tower so that later changes in colour have somewhere to be wiped.

Anyhow the problem with the red filament continued as can be seen in the odd yellow splodge that was deposited on top of it. I started to think again that the whole model would fail but it actually completed – just without the red filament making another appearance. Initially I thought the problem might be the filament itself but later I realised that the extruder spring arrangement (which forces two sets of interlocking gears to grip the filament and seems a good improvement on the MK2 extruder) wasn’t as tight on the red filament as on the others – so maybe that was the problem? 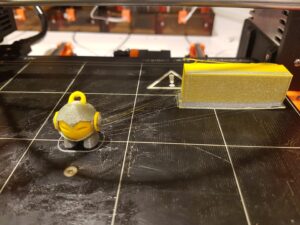 I decided simpler might be better to start off with and backtracked to a simple key-chain acoutrement called Marvin. After changing the red filament for silver I decided to actually try slicing the model myself this time. This wasn’t so easy to get to grips with – firstly I tried opening the model in the Prusa Control program – but that seems to be just for visualisation? And then I tried to open each colour’s stl separately in the Slic3r software but they simply “fell” to the bed level – out of alignment with each other.

At this point I had to resort to reading the manual – never a good thing if the software is that unintuitive, I feel – and it turns out you have to open the stl with the lowest point in it first and then double click that model in the UI to get up a dialog where you can load the other layers – odd!

Anyhow, it worked ok and I managed to get a little Marvin model out of the machine in around four hours of printing! A pretty long time for such a little fellow I thought.

What a Waste Though

The real story here though is the waste in this process. As can be seen from the photos below the useful output is around 3.7g while the “wipe tower” is a staggering 19g! There are some comments in the manual that suggest printing several models at once to reduce the wastage and I may well have chosen a pretty inefficient model but I must confess I was rather shocked by this. I can’t help feeling that there must be another incremental improvement coming in the future – perhaps a smaller chamber in the hot-end? – or a shorter path through the hot-end? – or another way to purge the old filament (air?) so there isn’t so much loss of filament required to get a pure colour (I base this on observing the colour variation on the top layer of the wipe tower in the photo below – it goes from pure silver to a mix to pure yellow but it takes a while)? 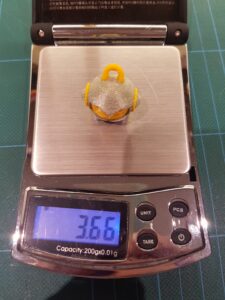 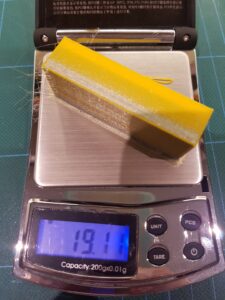