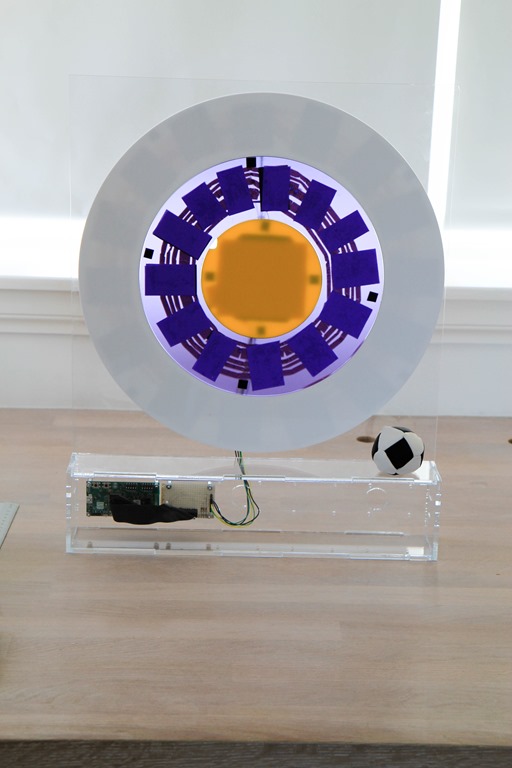 Chris Greening (@mrbananas) has been working on an exciting project to bring web UIs to IoT devices – more about this later. He has been up to stay with us in Edinburgh for a few days and we’ve been working on a small demonstrator for his tech. We decided to build a BLE target suitable for a hacky sack throwing game (inspired somewhat by this). 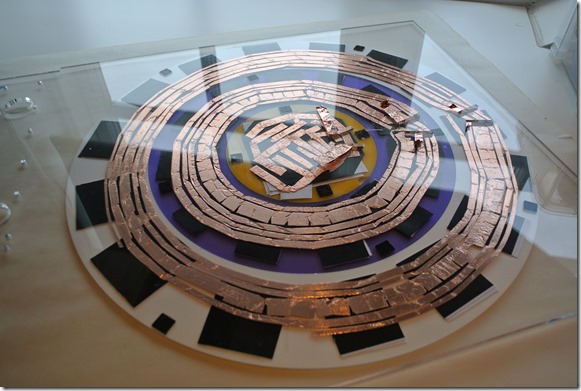 Following the advice in this instructable and other sources we used Velostat and made sensors using the kind of copper tape that is used for RF/EMI shielding.  The approach we used was to apply the adhesive copper tape directly to the backing acrylic sheet (5mm clear) and then fix up any overlaps with a soldering iron (see the photo below). This is the centre of the target where we started and we really didn’t pay too much attention to the layout – we shold probably have used thinner strips and less gap between “tracks”.

The real issue was to mount the Velostat such that it would touch the copper tracks (more firmly) when hit with a hacky sack. Unfortunately the 3mm acrylic sheet used for the rings was pretty rigid and it took a look of experimentation (by Chris) to find that 5 sheets of 80gsm paper was a suitable thickness when the discs are fixed in place with outdoor stick-fixers (Sellotape product).

Once he’d discovered this it worked pretty well when we tested it with a simple potential divider and scope.

We thought through the outer rings a bit more and decided to do an interlocking spiral which was relatively easy to construct. Here’s Mr Bananas himself assembling the Velostat pads on the outermost ring and the completed target with the electronics wired up.  The final target has an unusual see-through effect and perhaps looks a bit like a violet daisy – mainly due to the fact that I didn’t have any red 3mm acrylic material to hand.

The target is self-standing but the idea is that it will be pushed up against a wall on a desk or similar when in use – it’s fairly stable against falling forwards on a recoil but there is no support behind.  The target cutting files (for a laser cutter) are on github.  I found that I could get a good interference fit on the interlocking fingers of the box section below the target by using tenons that are 0.7mm longer than the mortises – this is because the cut-away (kerf) of my laser cutter is about 0.4mm wide.  So the mortise designed to be 65mm long will actually be around 65.4mm long (half of the kerf at each end of the mortise) and a tenon similarly would be around 64.6mm long. So adding 0.7mm to the design of the tenon brings it’s length close to the length of the mortise and ensures a good fit. 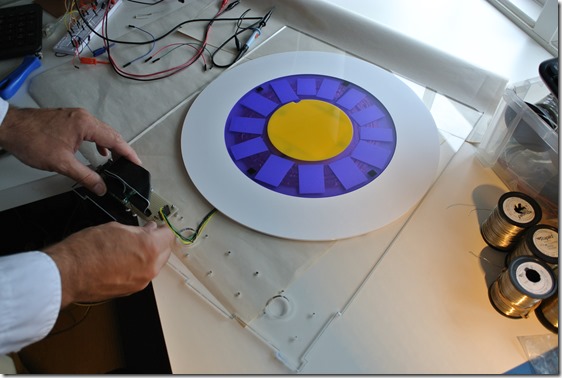 The electronics are super simple as we just used 10k pull-down resistors in a potential divider arrangement with the Velostat sensor. The junction of the 10k resistor and sensor is generally near to 0V and the voltage jumps in accordance with how hard the target is hit.

The MBED compatible board we used is the nRF51822-mKIT which can be seen (unclearly) in the photo above connected to the minimally populated strip-board with an over-large IDE ribbon cable.  We used pins P0_1, P0_2 and P0_3 as analog inputs for the three rings on the target.  The code is available on the MBED site.

Our goal was to build something to demonstrate Chris’s web UI builder but that’s not quite ready to show yet so stay tuned for another post on that soon.